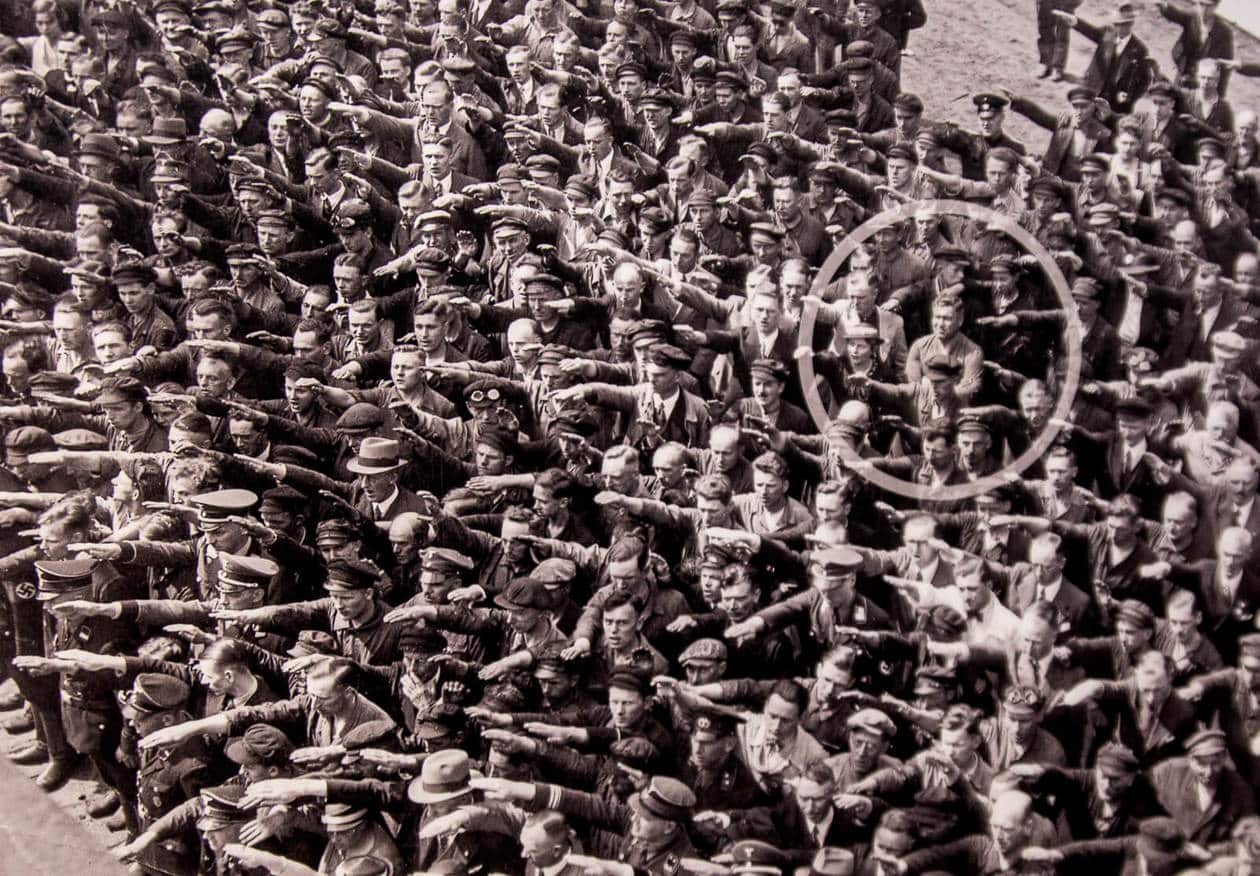 You’ve probably seen The Topography of Terror on just about every “Things to do in Berlin” list, but what exactly is it? The cold gray building on Niederkirchnerstrasse is a WWII museum located on the site where all the atrocities of the Nazi’s reign were orchestrated, managed and coordinated – where the former Gestapo headquarters once stood.

Keep reading for what to expect at the the Topography of Terror museum, tips for visiting, plus discover four other WWII sites in Berlin.

WHAT IS THE TOPOGRAPHY OF TERROR?

The Topography of Terror is located on the site which was once the main vein of the Third Reich.  It was here that the headquarters of the Gestapo were once located. It addition to being the Gestapo HQ, it was also home to SS Headquarters, the Reich Security Main Office and the Gestapo “house prison” for political prisoners.

The original buildings were destroyed around 1945 in Allied bombings and then most of those ruins were destroyed after the war. There are a few excavated remains on display, as well as the foundational remains of the Gestapo prison.

Today, the site is home to a museum which details (in great depth) the rise and fall of the Third Reich.

I have visited a lot of WWII sites throughout Europe and this one is unique in the sense that it’s centered around the Nazi party. The permanent exhibit is extremely well done and serves as a sobering reminder of the past, as well as important warning for the future.

THE THIRD REICH Used to describe the Nazi regime in Germany from January 30, 1933 to May 8, 1945.
THE GESTAPO The official secret police of Nazi Germany whose main purpose was to identify those who were a threat to the Nazi party.
THE SS  Initially began as Hitler’s personal bodyguards and later became the private army of the Nazi party. They were an elite force that symbolized the Nazi racial ideal and were considered the most “loyal of loyal.” They were the executers of the “final solution” aka the murder of European Jews.
REICH SECURITY MAIN OFFICE  The security services of Nazi Germany and the Nazi Party. It’s activities included intelligence-gathering, criminal investigation, overseeing foreigners, monitoring public opinion, and Nazi indoctrination.

VISITING THE TOPOGRAPHY OF TERROR MUSEUM

The Topography of Terror museum was designed by Urusla Wilms and Heinz W. Hallmann to be purposefully minimalistic. According to Heriland, they wanted to avoid glorifying the site and kept it simple so that it would serve solely as a source of information.

It is definitely minimalistic. Made of just steel and glass, the bare square building is not beautiful, but it does makes sense. As you approach, you’ll cross a glass covered walkway with ruins out front. Inside of the museum, a maze of information boards and photos fill the room.

This museum is about information so there are no artifacts to view (except for a portion of the Berlin wall outside which happens to be on the same site). It is just the information boards with photos, and select audio/video clips.

The layout is chronological and details the rise and fall of the Third Reich. There is a lot of reading and depending on your interest level in the subject, prepare to spend a good amount of time taking it all in. Because of the crowds, we skimmed some sections, while taking our time at others.

The museum is incredibly honest and extremely detailed. They present the facts as facts, in plain black and white.

I especially found the section on Nazi propaganda interesting. You are given a glimpse into what it was like to be living in Germany as a non-jew. I’ve always wondered how so many people could have been on board with what was happening during this time. It was fascinating, albeit a bit sickening.

Topography of Terror is a free museum and it is extremely busy. With over 1 million visitors each year, this is one of the most visited places of remembrance in Berlin.

There were several tours taking place when we were there, so we found it difficult at times to squeeze in and read the wealth of information located on all of the information boards. We came up with a good system of trailing behind a large tour group and sneaking in as soon as they moved on.

I recommend visiting early in the morning before the crowds arrive for a more enjoyable and relaxed visit.

The Topography of Terror offers free guided tours on Saturday and Sunday. The tour is given in English. It starts at 3:30PM and lasts one hour. Reservations / tickets are not available, you just show up and look for signs marking the meeting point.

If you are visiting with a larger group, you can purchase a tour on their website here.

HOW TO GET TO THE TOPOGRAPHY OF TERROR MUSEUM

Tickets are not necessary. The museum is free.

The site also happens to contain the longest surviving section of the Berlin Wall in the center of the city. These 656 feet (200 meters) of the Wall marked the border between East Berlin and West Berlin.

RELATED POST: EAST SIDE GALLERY // THE LONGEST SURVIVING SECTION OF THE BERLIN WALL

All of the indoor and outdoor portions of the site are wheelchair accessible.
Audio guides are available for those who are blind or visually impaired.

RELATED POSTS ABOUT THE HOLOCAUST AND WWII:

TIPS FOR VISITING THE TOPOGRAPHY OF TERROR

GO EARLY OR LATE Avoid the crowds and tour groups by visiting when it opens or later in the day, just before closing.
GRAPHIC PHOTOS The information boards are factual and presented without censors of any kind. There are graphic photos and very detailed (hard to read) information.
GUIDED TOURS Are free on Saturday and Sunday at 3:30PM. No reservation necessary.
VISIT TIME Average visit time is about 2 hours. Depending on your interest level in the subject (and how fast you read) plan to give yourself 1-4 hours.
CHILDREN Due to the graphic nature of the subject, plus the fact that it’s pretty much only information boards, I wouldn’t recommend this to families with young children.
PHOTOGRAPHY is allowed for personal use. Tripods are not allowed.
ETIQUETTE Remember that this is a memorial site so please be respectful.
CHECKPOINT CHARLIE is only 550 meters (0.3 miles) away. Good to keep in mind as you plan your itinerary

RELATED POST: THE COLD WAR IN BERLIN // A VISIT TO CHECKPOINT CHARLIE

IF THE TOPOGRAPHY OF TERROR INTERESTS YOU, CHECK OUT THESE OTHER WWII SITES IN BERLIN

MEMORIAL OF THE MURDERED JEWS OF EUROPE

The Memorial to the Murdered Jews Of Europe pays tribute to the Jewish victims of the Holocaust. 2,711 concrete slabs in varying heights line the square and it’s one of the most popular tourist sites in Berlin. The architect, Peter Eisenman, wanted to create and “uneasy feeling” when visiting, but the memorial’s meaning remains up to interpretation.

The Kaiser Wilhelm Memorial Church was damaged by air raids in 1943 during World War II; the top of the main spire broke off and the roof collapsed. While the rest of Berlin evolves and modernizes around it, the damaged church still stands un-rebuilt a reminder of the city’s past and a memorial for peace and reconciliation. Admission inside is free and they still hold services today.

In 1936 Berlin won the bid to host the Summer Olympics and Hitler ordered the 110,000 seat Olympic Stadium to be built. He saw the event as an opportunity to push Nazi propaganda, even lobbying for an “Aryans-only” policy. Today, you can visit alone or as part of a guided tour.

The air raid shelter which became the last Nazi headquarters used by Hitler during WWII. He moved to the bunker in 1945, married Eva Braun within the complex, and eventually they both committed suicide and were cremated on site. Today, it’s a simple parking lot with hardly any markings and not much to see except for a single information board.

PIN IT: TOPOGRAPHY OF TERROR MUSEUM IN BERLIN

1 thought on “Topography of Terror Berlin: A Visitor’s Guide”