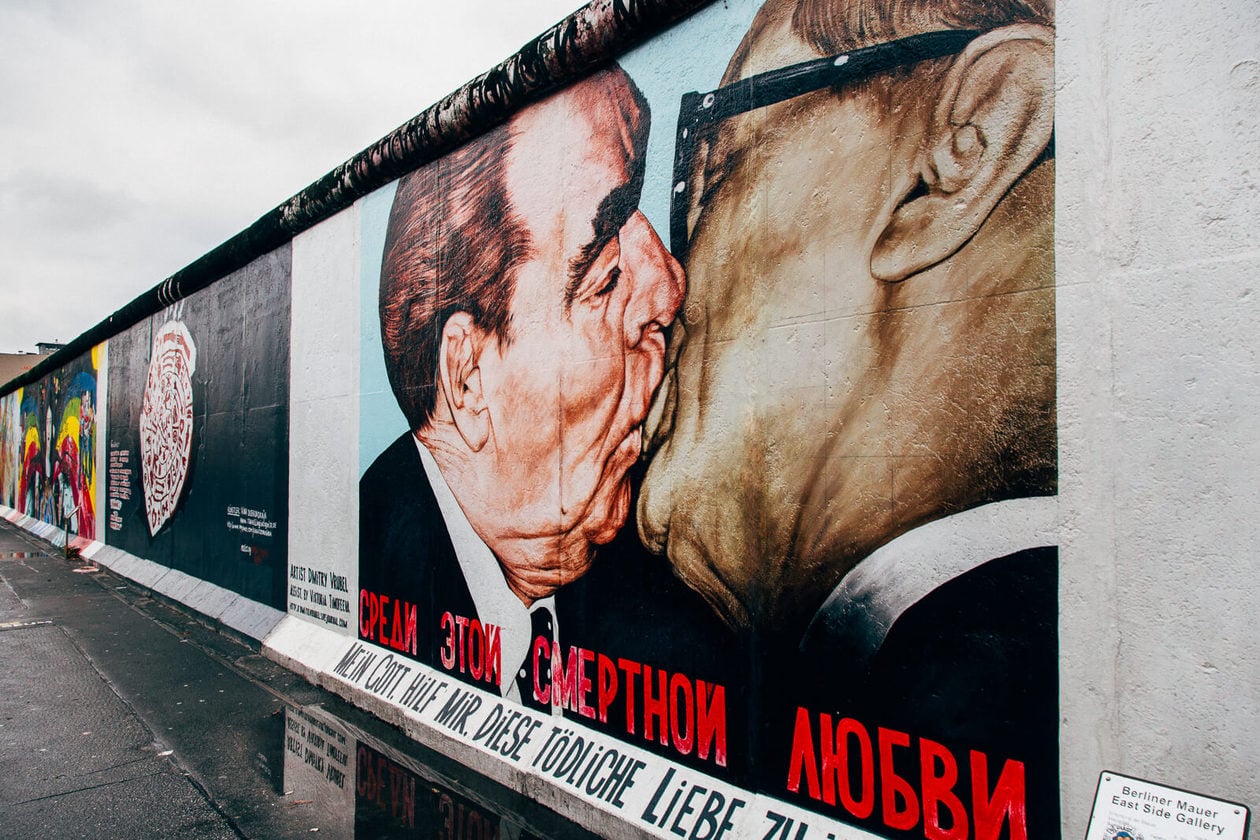 Easily one of the most powerful symbols of the Cold War, The Berlin wall divided a city for 10,316 days. As of today, The Berlin Wall has been down for longer than it stood! While in Berlin, we [obviously] made a stop at the East Side Gallery, a collection of 105 paintings decorating the east section of the wall. Keep reading for information about the Berlin wall, photos of the East Side Gallery, as well as tips for visiting.

THE BERLIN WALL // A BIT OF HISTORY

Visiting The Berlin Wall is usually at the top everyone’s list on their first visit to Berlin. It was on mine, and I didn’t even fully understand what it was. Not my proudest admission.

After a ton of research (thanks Wikipedia), paired with a visit to the East Side Gallery, I now feel qualified to school others. Just kidding.. but here’s my cliff notes version for anyone else who feels as confused as I once did.

Located in the eastern part of the country, Berlin should’ve technically been controlled by the Soviets, but since it was Germany’s capital, the 4 major powers (Britain, America, France and the Soviet Union) divided the city into 4 parts.

Not wanting to live in the Soviet controlled, communist East Berlin, citizens began to flee. Over a period of 10 years (1949-1959) 2 million people left. Eventually, the leader of the Soviet Union ordered that a wall be built to stop this from happening.

On August 13th 1961, the Berlin Wall was erected overnight, and without warning. People in Eastern Germany were not allowed to leave and many were separated from the friends, family and jobs.

The wall between East and West Berlin was 11-13 feet high and stretched for 28 miles with over 300 watchtowers spanning the length. It’s believed that between 125-206 people were killed trying to escape over the wall. The exact number remains unknown as the East Germans did not record the death tolls.

The fall of the Berlin Wall happened almost as quickly as it’s rise. As Communism began to falter in the late 80’s, mass demonstrations against the government and the system in East Germany begun.

East Germany’s head of state, had to resigned on October 18, 1989, and on November 9th, 1989 on official of the GDR announced that Berlin Wall’s borders were finally opened.

Thousands of people from both sides rushed the wall and celebrations ensued. Families were reunited and many people brought hammers and picks to start tearing down the wall themselves.

THE EAST SIDE GALLERY

The East Side Gallery is the longest section of the Berlin Wall that is still standing today. In 1990, shortly after the wall came down, 118 artists from 21 countries showed up to paint on it’s remaining 1.3 kilometers (.8 miles).

Today, it is known as the longest open-air gallery in the world, and an officially recognized memorial.

One of the East Side Gallery’s most famous paintings is by Dmitri Vrubel. His iconic painting depicts a kiss between communist leaders, Leonid Brezhnev and Erich Honecker. It reads “God! help me stay alive among this deadly love” in Russian.

HOW TO GET TO THE EAST SIDE GALLERY

To reach the East Side Gallery, take the U Bahn to Schlesisches Tor or Ostbahnhof stations.

Both stops are at the opposite end of the wall so if you walk the length, you can easily hop back on the U-bahn.

TIPS FOR VISITING THE EAST SIDE GALLERY

BE WARY OF GETTING YOUR PASSPORT STAMPED There are souvenir shops that will stamp your passport with replica stamps  once given when you’d pass between East and West Berlin. These have the potential to render your passport invalid! Get them stamped at your own risk. Check out this article on PassportInfo.com for more information.
CHECK THE WEATHER The wall is completely exposed to the elements so plan your visit accordingly.
CHECK OUT KREUZBERG Just across the bridge (Oberbaumbrücke) is one of my favorite neighborhoods in Berlin, Kreuzberg. It’s filled with laid back restaurants, shops, bars and an awesome street food market on Thursdays. It’s an artsy, hipster area with a much grungier/cooler vibe than Alexanderplatz.
BERLIN CARD The East Side Gallery is a little ways outside of the city center. We used the Berlin Welcome Card during our visit which included free public transportation. Cards start at €19 for 48 hours and also include admission discounts. For more information about the Berlin Welcome Card click here.