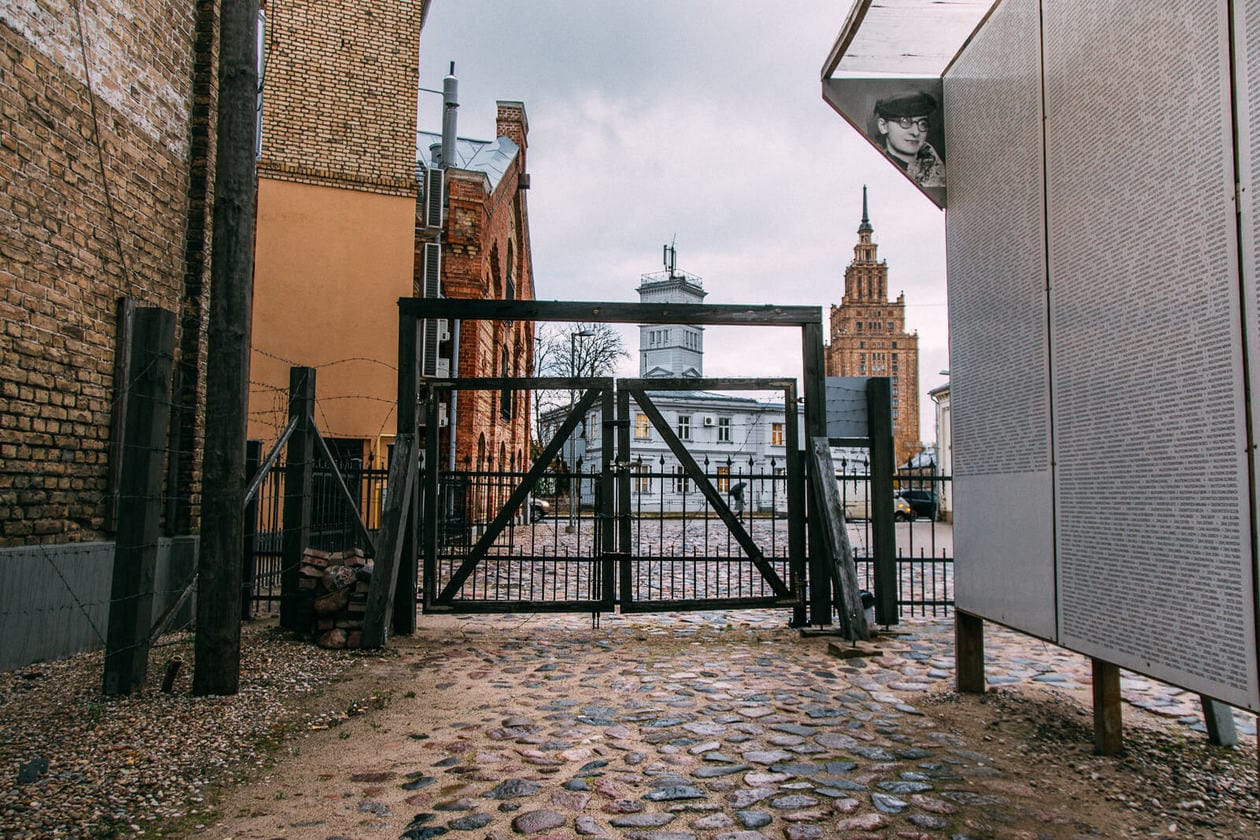 As someone who actively seeks out the history of the places I visit, the Latvian Holocaust Museum was definitely on my list of things to do in Riga. The Riga Ghetto was established in October 1941 when 30,000 Jews were relocated to a small, 16-block area, separated from the rest of the world by barbed wire fences and armed guards. During the years of the WWII Nazi occupation, 90,000 Jews in Latvia were murdered.

Keep reading for what to expect when you visit The Latvian Holocaust Museum, plus discover an excellent walking tour through the old Riga Ghetto. 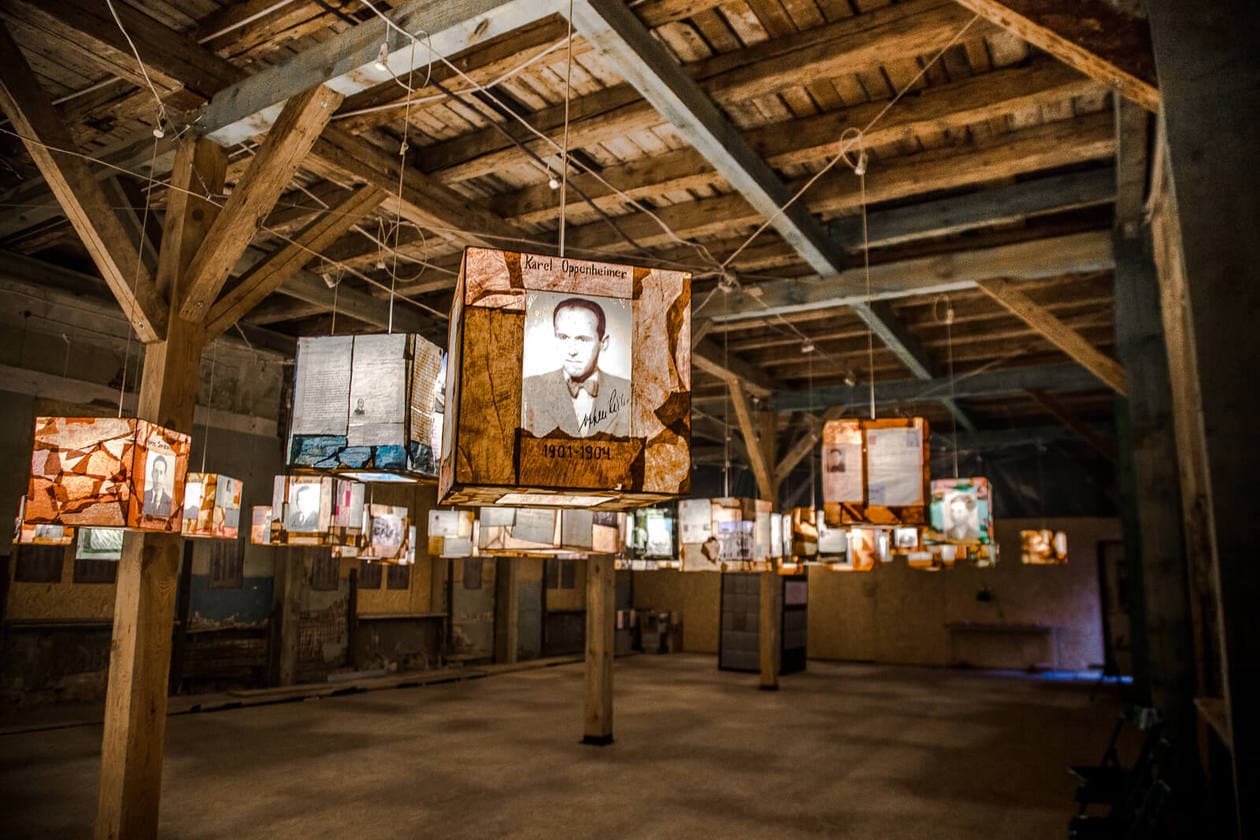 THE LATVIAN HOLOCAUST MUSEUM IN RIGA

The Latvian Holocaust Museum is a short 5 minute walk from Riga Central Market. The area is not as beautifully restored as Old Town Riga, so it’s an interesting alternative view of the city.

The museum showcases life for Latvian Jews before and during the Holocaust.

I was not aware that the museum is actually located outdoors, so I visited around sunset thinking it would be a good activity for when it got dark. Since the sun was going down fast and I was pressed for time, I probably did not get a fully accurate representation of the museum. With that said, it was a little confusing to navigate.

It wasn’t completely clear what or where the exhibits were. It was easy enough to infer, but I would have loved more information, especially since this is a topic I’m very interested in.

The cobblestone entry into the Latvian Holocaust Museum is made from the same cobblestone of Ludzas Iela; the main street of the Riga Ghetto. It’s definitely a sobering way to begin your visit.

A yellow and black train car, and a large wall to the right will be the first thing you see. One side of the wall pays homage to the 70,000 people who died in Latvia during the Holocaust, each person is listed by name. On the other side, the story of the Holocaust in Latvia is displayed.

The train car is open, so you can step inside and gain a sense of just how cramped it was for the 100+ people being transported for days with no food, water, or a place to use the toilet.

Parallel to the wall are a few doors with additional exhibits. Several of the rooms were dark and the light switch didn’t work so I had to skip them. I did walk around one room with 100’s of lanterns on display. The lanterns each had a photo and a story for individual victims of the Holocaust. The stories were in Latvian so I couldn’t read them but still felt moved by the installation.

There is a a restored house within The Latvian Holocaust Museum grounds. The house once stood on Maza Kalnu Iela 21, within the border of the Riga Ghetto. The interior has been reconstructed to look as it did during the war. At one point in time, 13 people lived in each of the tiny rooms. There are a few displays with people’s personal belongings, and authentic old newspaper clippings line the walls.

I wasn’t able to make it inside of the house before dark and was sad to find out that the lights didn’t work in here either. Walking around inside (alone in the dark) felt a little eerie and I didn’t end up spending much time in this exhibit, even though I wanted to.

If you are interested in the history of this time period, the Latvian Holocaust Museum is not too far out of the way to make the trip worthwhile. It’s also free (with a €5 suggested donation) and it would only take up about an hour of your time.

It’s an important museum but I do feel it could’ve been curated a little more intuitively. The website says there are guides to walk you around and answer questions but I didn’t see a single other person while I was there. I will probably visit in the daylight next time I’m in Riga and hopefully have a different experience.

While I was at the museum I discovered that the Riga Ghetto was very close and that The Latvian Holocaust Museum has an excellent (and free) tour on their website.

The tour is actually designed to be virtual, but I used it as a guide to walk through the Ghetto while in Riga. You can view pictures of how it looked during the war and listen to stories narrated by a survivor named Yakob Basner.

The walkthrough is fantastically done, and many of the buildings are still standing. Check out the tour on the Latvian Holocaust Museum’s Website.

Kazimierz and The Krakow Ghetto

A Visit to Schindler’s Factory in Krakow Poland

Hofbrauhaus: Munich’s Most Popular Beer Hall has a Dark Past