The Most Important Thing to do in Iquitos

It is illegal to possess or sell wildlife in Peru. However, spend 10 minutes in the market of Belen and you’ll see monkey babies, sitting next to their mother’s carcasses, both for sale. Nothing is being done to stop the illegal murdering and trafficking of the animals this city so proudly displays on the their brochures and flyers.

Hanging on the walls of the Ecological/Tourist Police Station in Iquitos are beautiful posters and paintings of wildlife. Directly beneath them, an officer refuses to file our complaint regarding the illegal activity we’ve witnessed. The only way for enforcement to be an option is if we bring a police officer to the specific area, then they must start an investigation which usually winds up with them being paid off. The police are 100% aware of what is happening in Belen; it is a “red zone” and if they enter, everyone puts their illegal items away so police don’t even bother. We talked to a local man that remembers seeing an officer playing with a sloth in the market. 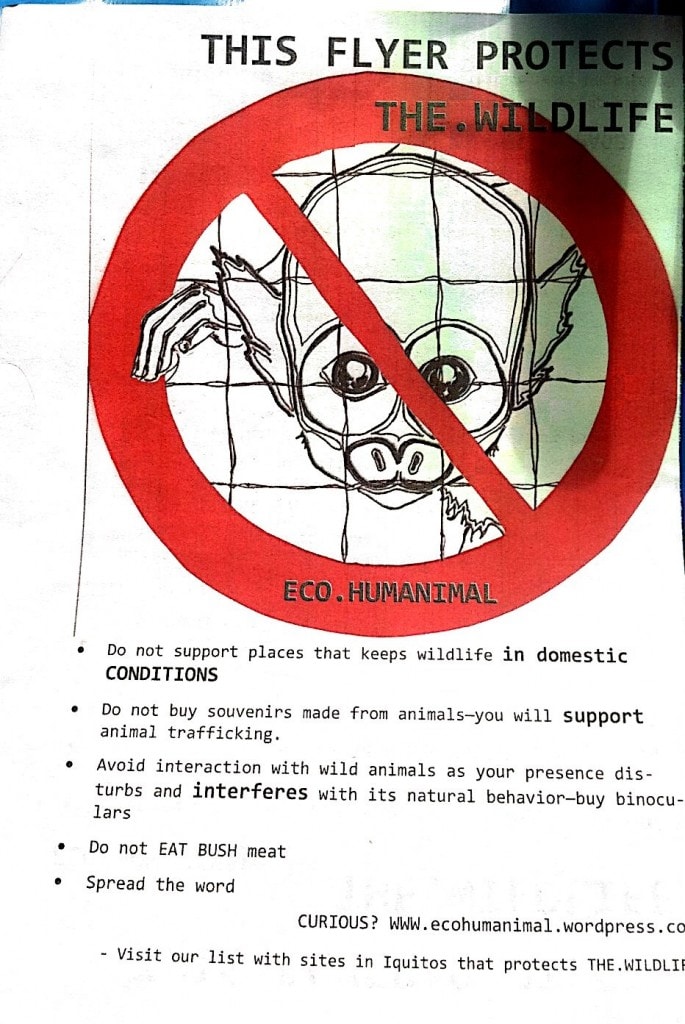 The Peruvian government allows Gilberto to have 8 of the 28 species at the La Isla De Los Monos rescue center. If he brings additional species here, he will be fined. If he releases them into the wild without paying, he will also be fined. These are the issues the government chooses to care about. The other day we saw a baby capuchin monkey tied to a post. The rope was too tight on it’s waist and was rubbing him raw. There was absolutely nothing we could do as Gilberto is not allowed to bring this particular species to his island. Leaving that poor monkey was a horrificly hopless feeling.

At the station, we ended up leaving our complaint with the police chief. Even though nothing will be done over a single complaint, we wanted them to know we are disappointed in what we’ve seen. If more tourists and locals did this it, it would bring awareness to the fact that people are noticing and demand action.

How You Can Help
When I get home I will be uploading a printable complaint form in both Spanish and English. If you are traveling to Iquitos please sign it and bring it with you to turn it into the police station. It will take 10 minutes out of your day and could save a life, possibly even a species.