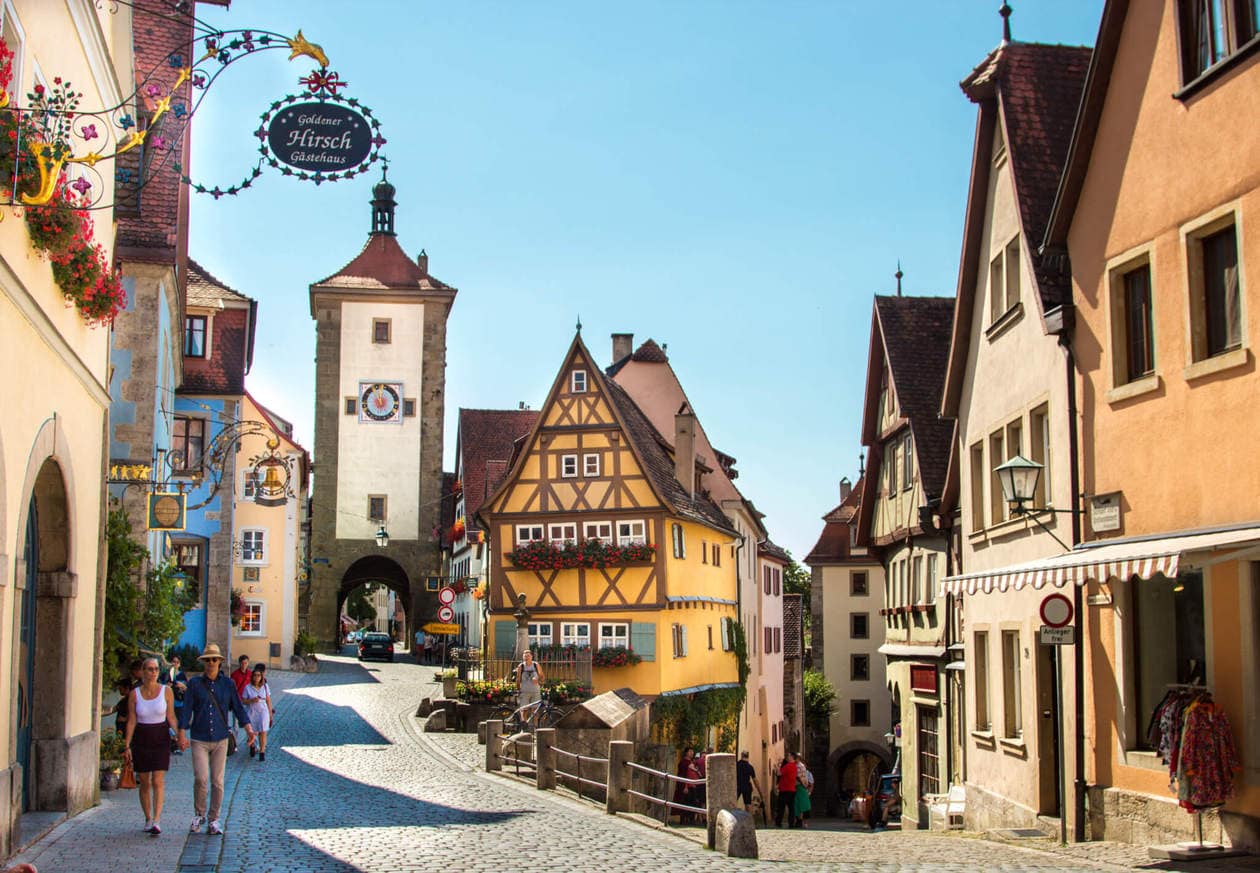 The Romantic Road in Germany is a popular tourist route that spans 220 miles (350km) between Wurzburg and Fussen. Along the way, discover dozens of picturesque villages, medieval walled towns and fairytale castles. All it took was one quick Google search and I was sold.. the Romantic Road sounded like magic.

Keep reading for photos, a suggested itinerary, and 3 things we wish we knew before embarking on our Romantic Road Germany road trip.

3 THINGS I WISH I KNEW BEFORE TRAVELING THE ROMANTIC ROAD

TRAVEL FROM NORTH TO SOUTH

Our first mistake was starting the journey at Neuschwanstein Castle because I fell head over heels for the Bavarian Alps. It is hands down one of the most beautiful regions in Europe (that I’ve been to), and anytime you set the bar that high, you leave yourself vulnerable for disappointment.

As we drove further and further away from the Southern half of the Romantic Road, all I wanted to do was turn around and go back the other direction.

I highly recommend starting in Wurzburg and traveling South to Fussen so that you get a proper grand finale.

RELATED POST: EVERYTHING YOU NEED TO KNOW ABOUT VISITING NEUSCHWANSTAIN CASTLE

THE ROAD IS NOT ROMANTIC

The term “Romantic Road” is quite possibly the best travel marketing ploy ever. When I picture a romantic road, a slow, windy route through perfect scenery comes to mind.

This particular journey looks very similar to driving through the middle of the United States. A lot of farm land.. not much to look at .. quite possibly the least romantic road I’ve ever driven?

THE JOURNEY IS EASIER THAN IT APPEARS

While there are 28 stops on the official Romantic Road Germany map, some of these towns are so small, you can drive through them in 10 seconds. Before our road trip, I was worried that 4 days wouldn’t be enough time because I wanted to see everything.

What I didn’t realize is that there’s not actually anything to see in some of the towns. A few times, we got off the highway expecting to explore some of the smaller villages and we didn’t see a single person.

DISTANCES BETWEEN THE MAIN TOWNS

From North to South

HOW TO TRAVEL THE ROMANTIC ROAD

The easiest way to travel the Romantic Road is by car.

Having a vehicle allows you to set your own schedule and it gives you the most freedom to see and do what you want. Frankfurt and Munich are the closest big city hubs on opposite ends of the Romantic Road, so it makes it super easy to pick up and drop off a rental car at either of these cities.

There is a 460km (286 mile) long network of designated cycleways on the Romantic Road, and cycling is one of the most popular ways of traveling it.

This was our itinerary when traveling the Romantic Road (except we did it backwards).

While we did move quickly through some of the towns, we never felt super rushed with only 4 days. Ideally, 5 days would be the perfect amount of time to see everything. 7 days if you really want to take your time and stop in some of the less popular towns.

Pick up your rental car in Frankfurt and drive to Wurzburg.

Wurzburg is one of the larger towns on the Romantic Road and as an eventful first stop,  I would suggest spending half a day here if you want to properly experience what it has to offer.

As you pull into town, you can’t miss Marienberg Fortress on the hill. This is one of the most popular things to do in Wurzburg, with some of the best views of the city.

Also be sure to check out Residenz Palace, a UNESCO World Heritage site and one of the most important Baroque palaces in Europe.

Since we did this itinerary backwards, Wurzburg was our last stop and we arrived after many of the main attractions were closed. So instead of touring palaces, we ordered a glass of local wine and took a walk across the famous Alt Mainbruecke bridge.

Wurzburg is actually the capital of the Franconian Wine Region and the bridge is a popular hangout to sip wine, listen to music and take in the views.

WHY YOU SHOULD STAY OVERNIGHT IN ROTHENBURG

Over 2.5 million people visit Rothenburg each year but only 500,000 book a room.

Walking around in the evening after the tour busses have gone home is a completely different experience, and we felt like we had the entire village to ourselves.

And as an added bonus, it looks even more magical after dark.

Because of its popularity, Rothenburg is one of the more expensive towns on the Romantic Road to stay in. If you’re looking to save money, pick a hotel or B&B outside the city walls. We booked an AirBnb for $35/night (in August!) and it was only a 5 minute walk to the center of town.

If you’re a first time Airbnb user, get $40 off your first stay by signing up here!

Wake up early and spend half the day exploring Rothenburg Ob Der Tauber.

Rothenburg Ob Der Tauber is one of the most famous and picturesque destinations on the Romantic Road.

Despite its inevitably large crowds, I still fell in love with Rothenburg’s charm and highly recommend spending some time here. For a list of things to do, what eat and where to stay, check out my related post below.

After spending the morning in Rothenburg, head South to Dinkelsbuhl (35 minutes).

When you conjure up an image of a quintessential German town, chances are you embodied everything Dinkelsbuhl has to offer.

It’s almost as charming as Rothenburg but without the large crowds and it ended up being one of my favorite stops.

Dinkelsbuhl was untouched during WWII and it remains one of the best preserved medieval towns in Germany, as well as a former Free Imperial City of the Holy Roman Empire.

We happened to be here during a festival, so the atmosphere was extra lively and fun. Its colorful buildings, cobblestone streets and lively promenade filled with restaurants, shops and cafes makes Dinkelsbuhl a must visit stop on the Romantic Road.

Spend 1-3 hours enjoying Dinklesbuhl and then drive to Nordlingen (30 minutes) where you’ll stay the night.

Nordlingen is super interesting because it’s located in the center of a large meteor crater. If you look at a bird’s eye photo of the town, you can even see the distinct circle outline.

Nordlingen is the only town in Germany where you can walk the entire length of the walls and battlements, so this is one of the most popular things to do here. They also have a gothic cathedral, St. Georg Dom, that you can climb for amazing views of the town.

Personally, I didn’t love Nordlingen so we only spent about an hour and a half here before moving on.

After spending some time in Nordlingen, drive to Augsburg (1 hour). On the way to Augsburg you have the option to stop at Donauworth or Harburg.

Augsburg is the third oldest city in Germany and one of the largest cities in Bavaria. Founded in 15 BC by the Romans, Augsburg is home to many historical sights.

We didn’t spend much time here as we wanted to focus on the smaller, more quaint towns and villages.

If you decide to stay longer, the most popular things to do are visit the Old Town Hall,  The Schaezlerpalais palace and Fuggerei, the world’s oldest social housing complex, where rent has not been raised in 500 years … and it’s residents still pay .88 euro each year.

In the afternoon, if you have the time, I highly recommend driving to Fussen (1hr 30min) so you can wake up early and beat the crowds at Neuschwanstein Castle. If not, spend the night in Augsburg.

Use the early morning to explore the famous, fairytale-like Neuschwanstein Castle. Or, if you stayed the night in Augsburg, wake up early and drive to Schwangau (home of Neuschwanstein).

RELATED POST:  EVERYTHING YOU NEED TO KNOW ABOUT VISITING NEUSCHWANSTEIN CASTLE

To beat the crowds, we arrived at Neuschwanstein when it opened. Our entire visit lasted about 3-4 hours and it gave us the rest of the afternoon to explore the nearby towns.

After touring Neuschwanstein, spend a little time walking around the small village of Schwangau and then make the quick drive to Fussen (5 minutes) and spend the rest of the day here.

In the afternoon, it’s time to head to Munich to drop off your rental car.

AN ALTERNATIVE SUGGESTION TO THE ROMANTIC ROAD

If I knew then what I know now, I would’ve re-arranged my entire itinerary to spend much more time in Bavaria.

If you find yourself getting deja vu along the Romantic Road (a lot of the towns are very similar) and need a change of scenery, consider skipping a few stops and spending the rest of your days in the Southern half.

Have you been on the Romantic Road Germany road trip? What was your favorite stop?