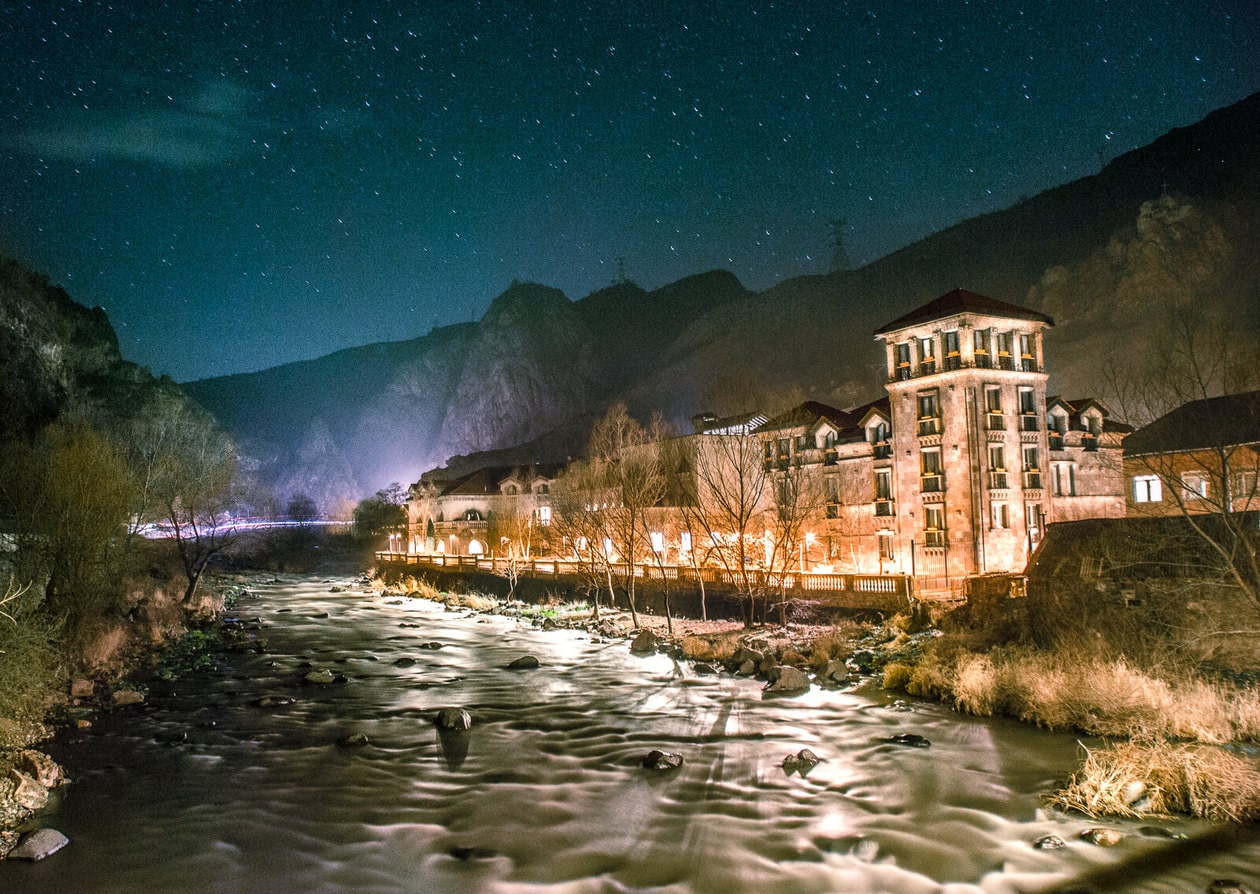 Putting together our itinerary for Armenia was difficult. Aside from Yerevan and the popular monasteries scattered throughout the country, there was very little travel information to be found. It was a little daunting, but more so exciting because we had the opportunity to really head off beaten path. With no knowledge of Armenia to begin with, the first thing I did was pull up Google Maps and start researching each town and village North of Yerevan. This is how I found Avan Dzoraget Hotel.

Avan Dzoraget Hotel sits on the Debed River, nestled in the shadow the the Caucasus Mountains and it is a peaceful retreat from busy Yerevan. Keep reading for more information about the hotel, plus photos, and how to find it (because it’s not easy!).

The hotel’s design is inspired by the romance of medieval Armenian castles. That, mixed with it’s unique, lush location in the heart of Debed Canyon, Avan Dzoraget feels magical. It’s the perfect setting for a cozy getaway, and an excellent jumping off point for exploring the Lori Province of Armenia. 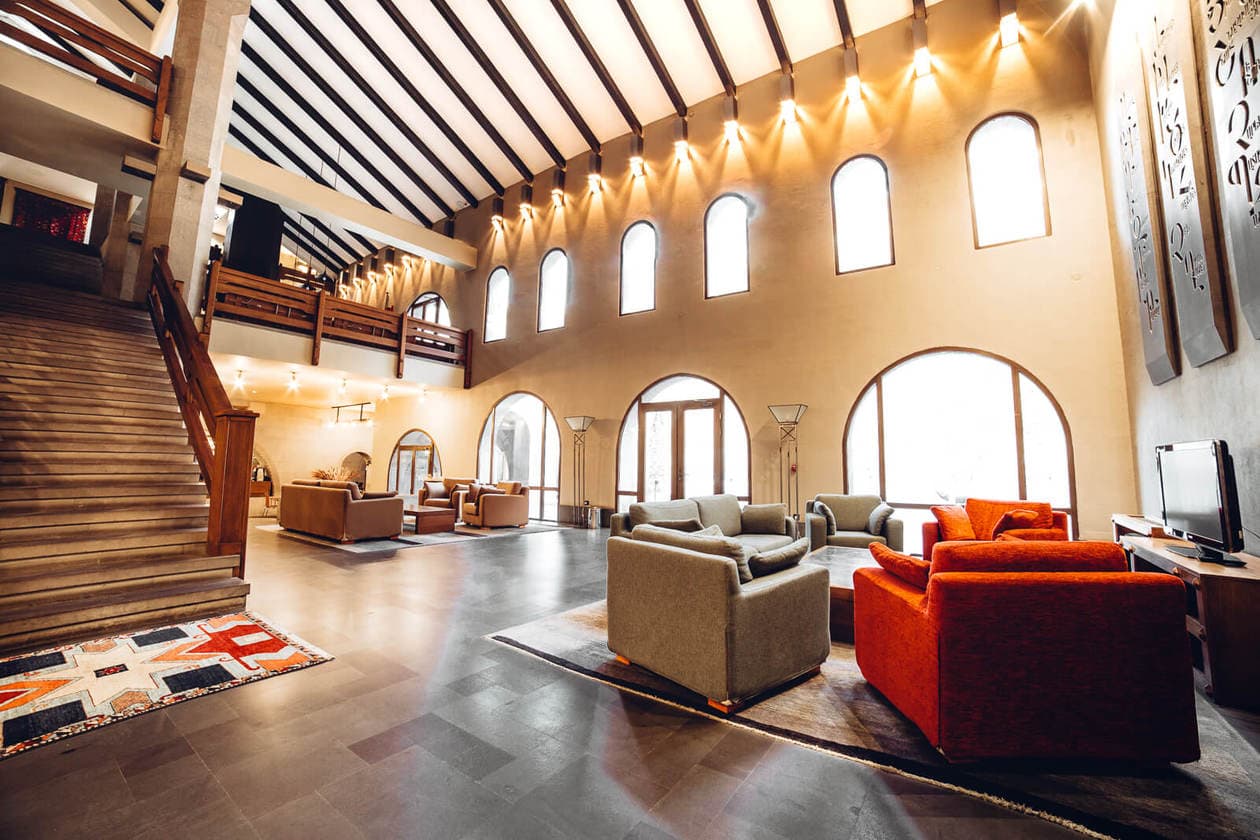 The roads nearby are under construction by the Government, so we highly underestimated the amount of time it would take to reach Avan Dzoraget Hotel. I had a list of things to do in Lori Province, but once we finally reached the hotel, it was so peaceful that we decided to spend our remaining daylight hours just relaxing there.

The building’s exterior is made from basalt stone and the interior is decorated with handmade Tufenkian carpets, while splashes of Armenian culture can be found throughout the property. You can find pre-medieval script decorating the walls, and Armenian folktales adorning the courtyards’ Taurus. As far as facilities, Avan Dzoraget has an indoor swimming pool, sauna, a modest gym and massage services upon request. 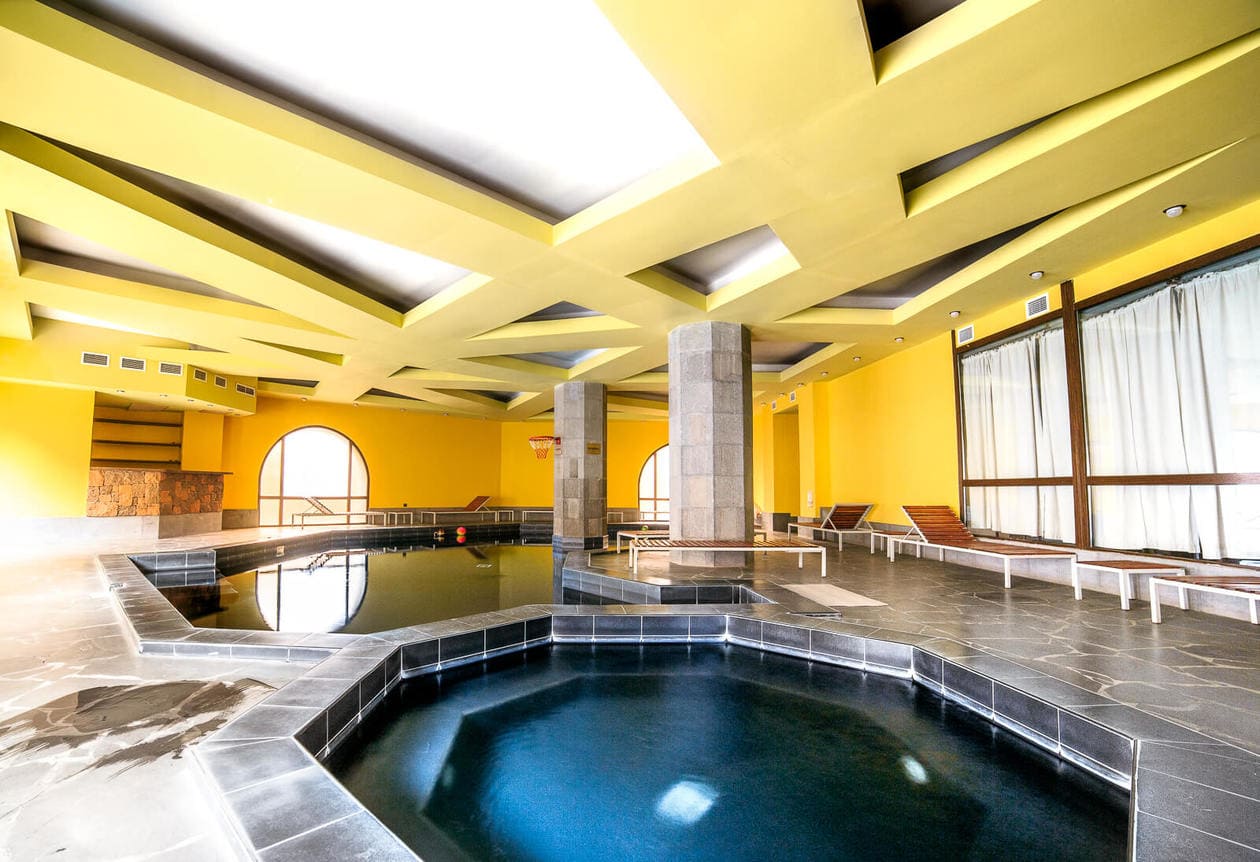 After spending some time outside on the river terrace, we decided to make our way down to the bar for a cold beer and a light meal. The hotel’s location is pretty secluded, so know that if you stay here you’ll probably find yourself eating at their restaurant, which serves Armenian and Georgian cuisine. We ordered lavash, pickled veggies, and of course a local cheese platter. The food was great, and although it was pricey for Armenia’s standards, everything was still very inexpensive.

Breakfast is included in your stay and on the menu are omelettes, fried eggs, fried potatoes, cereal, pancakes, soboureg and harisa. I’m not a fan of Western breakfasts so we tried to order one of the Armenian options but they didn’t have it. We ended up getting the pancakes and they were delicious. Breakfast also came with lavash and a cheese/meat plate.

Avan Dzoraget Hotel has 55 rooms on site, including 6 suites and 2 presidential suites. We stayed in one of their double rooms and my favorite part was our balcony, which offered a beautiful view of the river and surrounding mountains. The area is so remote that we slept with our door open so we could listen to sounds of the river while we fell asleep.

The room was simply decorated but had everything we needed, plus it was very comfortable, spacious and extremely clean.

CHECK IN 3 PM
CHECK OUT 12 NOON
BREAKFAST Included; 8AM-11AM
PARKING On site & complimentary
WIFI Free; The wifi was strong in the hotel lobby but a bit spotty in the rooms.
PRICE Rooms start at $100 USD 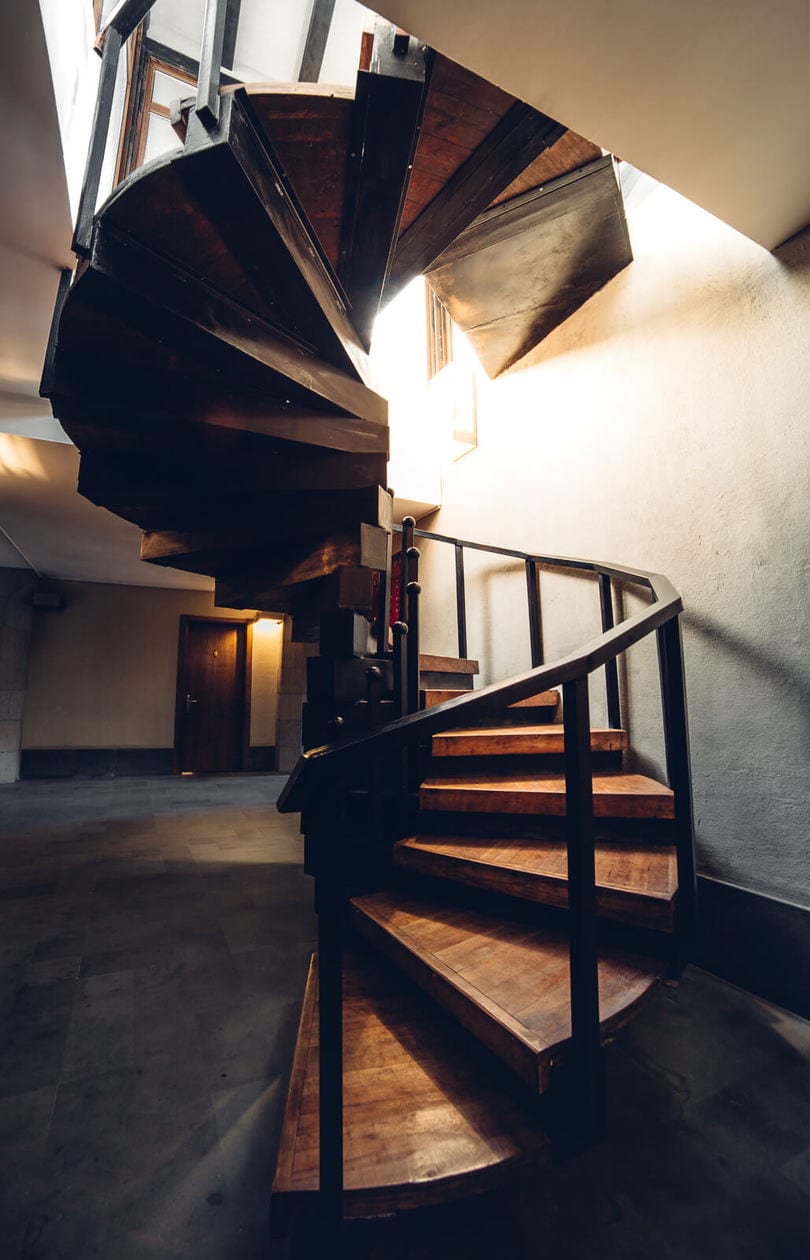 HOW TO GET TO AVAN DZORAGET HOTEL

In many of the reviews online, people mentioned difficulty finding the hotel. I didn’t pay much attention to this, thinking that saving it’s location on Google Maps was enough.. but it wasn’t.

The hotel is only 87 miles (140km) from Yerevan, but it took us over 3 hours to reach the general vicinity. The roads are under construction near the hotel so it was a long bumpy journey; and when we found ourselves driving in a remote village along a small stream, we realized that the hotel’s location on Google Maps was wrong.

Thankfully the Armenian people are very helpful, and after some language barrier induced charades, a local was able to point us in the right direction.. 5 miles up the road.

DRIVING  Reaching Vanadzor from Yerevan was easy and the directions were accurate. After that, we got extremely lost. The hotel recommends this routing once you reach Vanadzor (see map below).

BUS Renting a car is highly recommended but if necessary, you can reach the hotel via public transportation. From Yerevan, take the public bus (marshrutkas) to Vanadzor. At Vanadzor, take the bus which goes straight to Dzoraget, and from there, take a taxi to the hotel.

The roads are only temporarily bad and should hopefully be fixed soon!

5 THINGS TO DO IN LORI PROVINCE

The Lori Province in Northern Armenia is one of the most beautiful regions in the country. I recommend visiting in the Spring or Summer to see it in it’s full glory. We were there in early March and most of the trees were still bare. I can only imagine how stunning it is in full bloom.

These sites near the hotel were on my list of things to do before we ran out of time. I can’t wait to return to Avan Dzoraget and not only get to stay in this beautiful hotel again, but to properly explore what this region has to offer.

Disclaimer: Many thanks to Avan Dzoraget Hotel for hosting us! As always, all opinions are honest and my own. This post contains affiliate links which means if you make a purchase I receive a small commission (at no cost to you).